Every year Izamal hosts 2 major festivals or ferias. The city center is filled with music and dance, and if you're here at this time, you'll get more than a taste of real Yucatecan fun and hospitality. 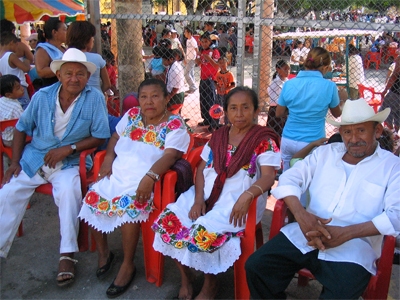 Fiesta Time in Izamal brings a carnival atmosphere, with rides for the kids, booths selling handicrafts and home goods.

You'll notice dates posted below, but nothing in Mexico is that simple! For a week (and sometimes longer) before and after almost any festival, the city will be alive with celebrations called Gremios. These are parties hosted by the different "guilds" (direct translation for the word "gremio"). Izamal is filled with music and dance during these times. If you're here at this time, you'll get more than a taste of real Yucatecan fun and hospitality.

Izamal's fiesta season starts off each year with the procession of the Cristo Negro (Black Christ) from his home in Sitilpech to the convento where he'll be installed as an object of adoration. The Cristo Negro represents the worker and he is an important source of solace and pride throughout Latin America.

At 5am the faithful of Izamal will process the 4km to the neighboring pueblo of Sitilpech where they attend a mass and start the journey back to Izamal. When the reach the Capilla de San José on the outskirts of town, they stop for another mass and the Cristo Negro is venerated until 5pm when the procession continues to the center.

Once the procession reaches the center, they circle the parks and eventually head up the great ramp to the convent. All during this fiesta which will continue pretty much right up to Janal Pixan (day of the Dead) there is a large fair in the center of town with colorful booths selling everything under the sun and kids' rides.

The procession is just the start. For the next several weeks the different gremios (guilds) hold their celebrations. Early in the morning you'll hear the drum, trumpet and saxophone leading the procession of Mestizas in colorful huipiles (traditional dress) throughout the town. The procession ends at the convent where a mass is held and then a great celebratory dance commences in the convent atrium. These dances can take many forms, but the most interesting is the "pig dance" where the men take turns dancing with a pig's head. I'm sure this goes back to Maya traditions and its great to see how they live on even today. Later in the evening, whole streets are blocked off and the beer flows and the music pulses. Its a great chance to experience Yucatecan pueblo life up close and personal.

The celebration of the dead goes deep into the prehistory of Mexico and you'll find many different celebrations all over the country, each exemplifying the indigenous population. Here in Yucatán the day of the dead is known as Janal Pixan or literally, food for those who have died. Houses are constructed of poles and leaves and mementos are placed for those who have passed. These are quite elaborate and often include stone wells and invariably the 3-stone hearth. The 3-stone hearth goes way back to the dawn of the Maya. You'll find it represented in Maya mythology and astronomy (one of the important Maya constellations is the 3-stone hearth, complete with the galaxy andromeda in the center to represent the fire!). For many here in Izamal, it is still the dominant way to cook.

The modern celebration is a result of the mixture of the indigenous traditions and the catholicism of the conquest. The ancient traditions honoring the dead were subsumed by All Saints Day. The ancient traditions were steeped in the knowledge that life and death are an unending circle, that one depends on the other. The Maya and other residents of ancient Mexico, Central and South America were intimately connected to nature and the natural world. This connection with the natural world infused their daily lives and formed the basis for their spiritual lives. Death took its rightful place as an equal with life.

In centro (the main square) each year there is a contest to see who can erect the most beautiful and meaningful altars. As the sun begins to set, the light takes on the most glorious golden hues. Its the perfect time to stroll through the parks and watch the building of the janal pixan altars.

Festival of the Virgin of Izamal (December 8)

This is a great time of year to visit Izamal and experience one of the most beautiful and moving festivals in Yucatan. The festival lasts for several days and begins with gremios and bullfights starting the 27th of November. Gremios involve a precision through the town to the Convento where a mass is held. Then the pig dance follows (I don't want to give this one away, but it definitely harkens back to Mayan times and is an amazing sight). After that a huge block party ensues with dancing, eating and drinking. Gremio is best translated as guild and that has come to mean the different trades. For example, the taxi drivers will hold their gremio (not sure which day).

The local bullfights are not what you might expect of a fancy big city bullfight with a famous matador. More like rodeos, they are nevertheless a great experience. When a small town in Yucatan has a festival, they inevitably build, from scratch, a bullring of timbers and guano (palm leaves). If you have a bit of engineer in your makeup, just seeing the construction is its own thrill.

On December 7th the Seranata will begin (supposedly at 7pm, though time and the concept of things starting on time are pretty fluid here) and run through the night. The atrium of the convent is converted into an outdoor open air chapel with the statue of the virgin on a stage festooned with flowers. One by one people from all walks of life take to the stage and sing to the statue. Even though there are thousands of people in the audience, the singers sing to the virgin alone. The seranata goes on well into the night, then at 5am begins the mananitas (or morning songs). Stop in for a song or two or bring a thermos of coffee and drench yourself in this beautiful display of devotion.

After the mananitas the statue of the virgin is processed through the main squares and installed in the convent for the next couple of weeks. The 12th of December is the day of the assumption and the Virgin of Guadalupe is venerated. All over Mexico the roads will be thronged with pilgrims running, cycling, walking, carrying torches to celebrate the Virgin of Guadalupe. They are known as Guadalupanos. As Izamal is a major site in the Mary cult, a great number of guadalupanos make their pilgrimage to Izamal. Drive carefully, but by all means enjoy this wonderful tradition.